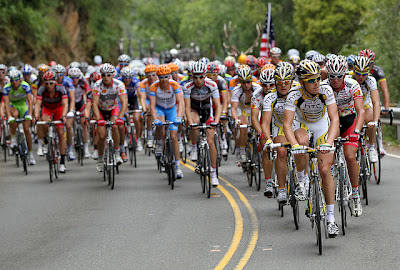 The 2011 Amgen Tour of California will start in beautiful South Lake Tahoe. The racers will cruise up the amazing west shore of the lake along Highway 89 and will start their first leg burning climb where the riders will ascend with conviction to the first of three KOMs “King of the Mountain” climbs at Emerald Bay, elev. 6,850’. Racers will enjoy the majestic ride on the west shore as they continue north into Tahoe City.  Racers will surely be making moves along the North Shore zipping through Kings Beach, past the casinos at Stateline and then onto the mostly undeveloped east short of Tahoe as riders make their way back to South Lake Tahoe. For the first time in Tour history 27 miles of race will be located in a state other than Clifornia (Nevada).  Although races will be surrounded by huge vistas they will be pushing hard to the 2nd KOM climb up to Spooner Pass (elev. 7,000’). After passing through South Lake Tahoe racers will head north once again along the west shore until riders come upon Kings Beach where they will bang a hard left on Hwy. 267 and start the final run to the finish line at Northstar. The final 7.5 miles is going to be brutal as the racers will climb 1,00’  to Brockway Summit, the highest point of the stage at 7,200’. Racers will then descend from the summit and a hook a left turn onto Northstar Dr. where the racers will battle it out on the the final 300’ of climbing up the 1.5-mile route to the finish line at the Northstar Resort.  Some racers will surely be way off the back on the first stage which we’ll have to see how it plays out on the other stages. This is going to be an epic battle and an amazing start to the Tour!