It’s safe to say that most of us have gotten used to spring-like temperatures in Lake Tahoe, some of us have even gone so far as to get out our patio furniture. Whether you are excited for snow or not, it’s on the way! Forecasters are calling for multiple feet up high by the end of this week. A Lake Tahoe Special Weather Statement has already been issued by the National Weather Service. This storm will hopefully keep us skiing and riding until the end of April at the many Lake Tahoe Ski Resorts.

Here’s the forecast written by  Bryan Allegreto at The Tahoe Daily Snow:

Today will be the last day of Spring weather so get out and enjoy it.  Tuesday the clouds and wind will be on the increase in the morning with precip pushing in during the afternoon.  Snow levels will start above 7000 ft. Tuesday afternoon but fall below lake level Wednesday night.  The heaviest precip is expected during the day Wednesday with snow showers lingering through Wednesday night.  By Thursday we could see 3-6 inches of snow on the East side of the basin and 6-9 inches on the West side.  On the mountains we could see 6-12 inches on the East side of the lake and 1-2 feet on the West side.

The forecast models are not in agreement with where the moisture plume sets up ahead of the next storm.  Some begin to clear us out Thursday through Saturday while others point the moisture plume at us during that time.  We will have to watch closely because the difference will be significant.  If the moisture plume points at Tahoe we could significant snowfall ahead of the cold front moving through Sunday.  The models do agree in the cold front bringing more snow Sunday and another system bringing more snow Monday into Tuesday.  They show the potential for systems to continue to move onshore through the end of next week.

Some interesting developments overnight on what happens between storms the end of this week.  We will get into that in a minute.  There are no changes in the thinking on the system moving in tomorrow lasting into Thursday morning.  The European model is slightly wetter but still drier than the other models.  It’s an outlier right now with the Canadian and NAM models more in line with the wetter GFS model.  The snow could begin falling along the crest by late morning tomorrow and then will push into the basin during the afternoon and into the evening.  The precip will start light going into Tuesday night.  During the day Wednesay as the jet stream aims at the area we should see heavier snowfall.  It may be heavy enough that even the high sun angle doesn’t prevent accumulating snow at lake level.  Then lingering snow showers under cold unstable air Wednesday night that begin to clear out on Thursday.

Here is the GFS through Tuesday.  You can see the bullseye with up to 13 inches of liquid is further South and closer to Tahoe.  This forecast would bring siginificant amounts of snow to the mountains on the West side of the lake.  More importantly it would punch another dent in the drought for Northern CA. 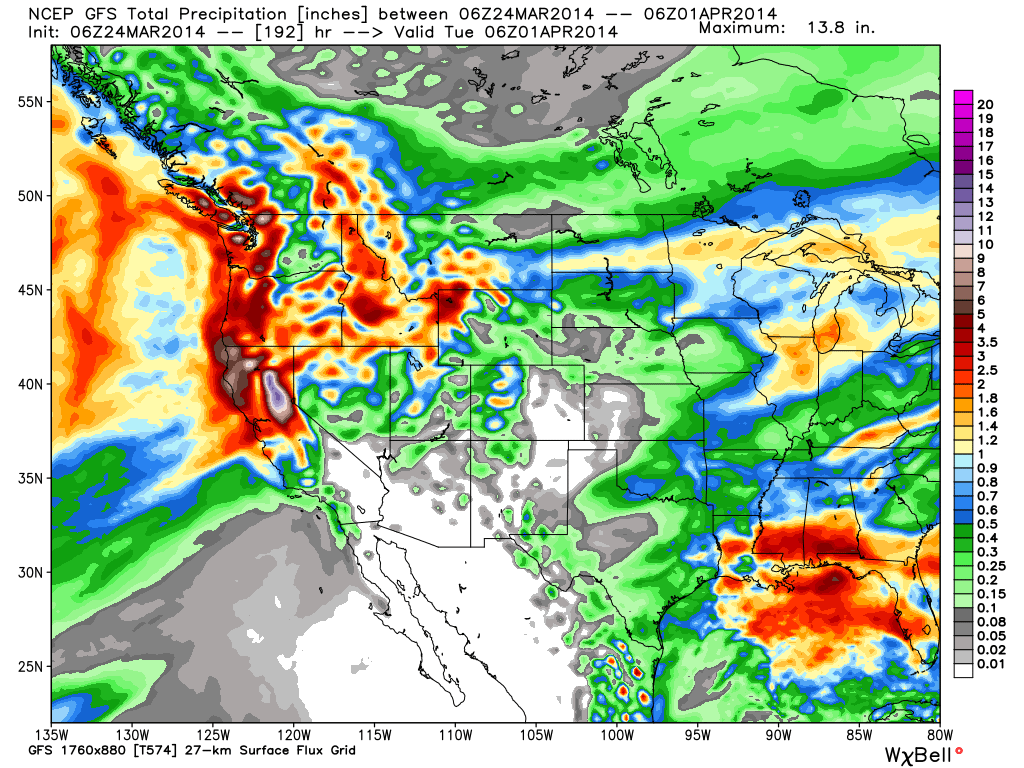 Get the full forecast from Tahoe Daily Snow