I just received this conceptual rendering of one of the proposals for the expansion of the Village at Squaw Valley that the renowned design/planning firm Hart Howerton has put together.  Based on this proposal it would seem that plans are in the works for an almost 10x expansion of the current size of the Village with more condos, townhomes, and single family residences being developed.
(click on the image to enlarge) 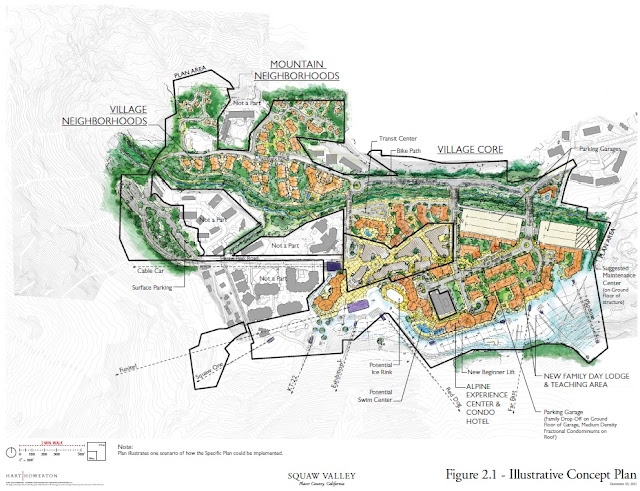 As you look at the rendering you will notice the current Village at Squaw is shown in grey towards the middle and then other existing buildings, condos, etc. are also shown in grey.  The proposal has multiple phases that will build out all current parking areas with mixed use development and it would appear that many current buildings will either be demolished or added onto.  Like the current Village, I am guessing that many of the structures will feature underground parking for owners and guests while patrons of the ski resort will either come to the mountain via public transit or be forced to park in the noted parking garages that are near the Squaw Valley Post Office.

At this time the rendering is just a proposal and will most likely be altered over the course of the Placer County approval process, but it shows you that KSL Capital Partners is thinking big and they are trying to make the most out of their acquisition of Squaw Valley.   My guess is that KSL will most likely get the approval process started and then sell the resort to another development company/ski resort management company similar to Vail Resorts for a hefty profit.  Historically KSL does not own assets for more than 5 years so it is hard to imagine that they would break their model for this project, but you never know.

To give you a sense of timing, the Homewood Redevelopment Plan took approximately 6 years to gain approval.  That process consisted of multiple public hearings, environmental impact studies, traffic studies all of which resulted in the reconfiguration of density and an approval to move forward.  That project was a quarter of the size of this proposal so I am guessing that the Village Expansion could be 6+ years out at this point.  The Tahoe region has a rigorous project approval process that will take into consideration how a given project will affect traffic, waterways, water usage, the environment, and most importantly, sustainability.  With the current vacancies in the commercial core of the Village it’s hard to imagine doing something like this in the current economy, but 10 years from now we could be in a different economy altogether making a project like this more feasible.

With a project of this magnitude there will surely be a population of those against the development plans.  Those in opposition need to make sure that their voices are heard by joining together and forming a group of concerned citizens and making sure that they attend planning meetings and establish a clear voice that the developers will hear.  There will also be many people who are in favor of the development of this project who have a vested interest in the opportunity that projects like this create.  In the end, times are changing and if you want to have some control over a project of this magnitude make sure to be pro-active and get involved with planning meetings and community gatherings to discuss what is going on in Olympic Valley.